I say ‘concede’ as reading the latest position statement blog from the Patients Association it would appear they are doing all they can to give the Ombudsman the benefit of the doubt.

PHSO’s performance certainly doesn’t seem to have deteriorated, which is arguably quite impressive of itself given the extent of the organisational change it has undergone during this period.

Much of that organisational change was as a result of PHSO ‘losing its way’ in the words of new Ombudsman Rob Behrens, who took over the role in April 2017. The fact that he has not been able to improve on the satisfaction scores from a time of very low public confidence should be of concern to the Patients Association. PHSO now announce they are drafting their next 3-year plan while we all wait to see improvements from the current one.

The Patients Association scold PHSO for not providing their Service Charter data in a form which allows for comparison over time. They are quite right to do so. In order to monitor improvements, data must be made available which measures the same outcome in the same way. They then invalidate their own data by altering the classification system used and the way in which cases are counted, making an accurate comparison with the ‘troubled’ PHSO days impossible.  They diminish the voice of the patient by claiming that those who make complaints about PHSO represent a ‘small number’ muddling ‘investigations’ (1,617) with ‘assessments’ (5,658) in order to better demonstrate the point.  It can be seen in the table below that the 2019 percentage score is virtually identical to that of 2016, indicating that fewer people are making complaints to the Patients Association on all matters. This probably has much to do with their change of direction and withdrawal of support for individual complainants.

The Patients Association were happy to endorse the data produced by the Ombudsman on the basis that it was calculated by an independent research company. There is no mention that PHSO act as the gatekeepers to the survey; passing on the details of complainants for ‘invitation’ to contribute. This data would be far more reliable if all users of the service were able to access the customer satisfaction survey. This data could then be displayed in real-time on the PHSO website to assist those considering using the service, making the Ombudsman far more transparent.

Conversely, the Patients Association do not consider consumer platforms, which display individual scores and comments, to be robust.  Given that PHSO consistently receives very low scores and negative reviews on sites such as Trustpilot the Patients Association decided to examine the scores for other Ombudsman services and found they were all equally poor. It could be concluded that all the Ombudsman services, working with the same flawed framework, repeatedly fail the public; but the Patients Association did not draw this conclusion. They decided that independent consumer feedback sites such as Trustpilot, served to attract a particular type of person. One who just likes to complain presumably. 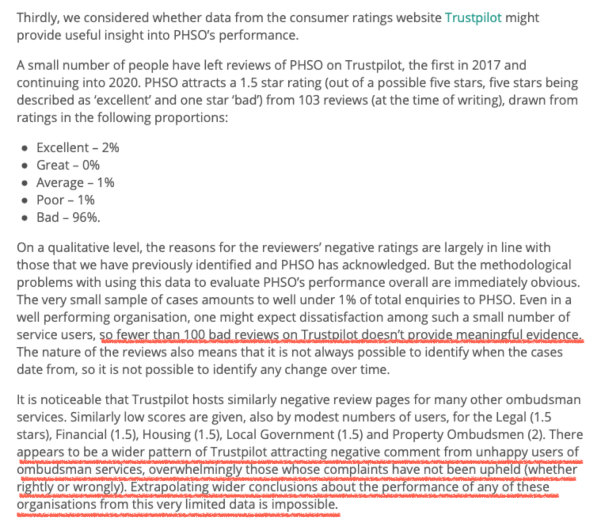 The number of people who take the trouble to complain will always be in the minority, this should not invalidate the nature of their complaint. It would appear that the Patients Association are doing their utmost to make a silk purse from data which is little more than a sow’s ear.

David Czarnetzki, a PHSOtheFacts group member wrote in concern to Lucy Watson, Chair of the PA, asking for confirmation as to whether, given the lack of discernible improvement at PHSO, the Patients Association finds the Ombudsman service ‘fit for purpose’.

Further to my communication and correspondence with the Patients Association earlier this year and in the latter part of 2019, I note its revised position statement regarding the Parliamentary and Health Service Ombudsman published on 26thMay 2020, together with the blog showing the rationale.

I have many observations to make but, firstly, wish to point out the House of Commons Public Administration and Constitutional Affairs Committee (PACAC) held a scrutiny session on 18th May chaired by William Wragg MP regarding PHSO. The closing date for submissions was extended to 5th May 2020. It is disappointing the Patients Association did not have evidence to submit to PACAC. This particular hearing was delayed as a result of the 2019 general election and the formation of the committee. It is reasonable to assume the next hearing will be later in 2020 (to receive the Ombudsman’s report to 31st March 2020).  It is my hope the Patients Association will make a suitable submission in future based on patient experiences, rather than rely on a regurgitation of PHSO’s own findings.

It is essential the Patients Association fully read the minutes of the PACAC hearing (available on PACAC’s website). Early in the minutes, you will find the Ombudsman and his Chief Executive trying to explain a data breach involving approximately 300 patients and several NHS Trusts, necessitating PHSO to report itself to the Information Commissioner.  The Patients Association will also find it essential to read all the evidence submissions made by the public, also on PACAC’s website, if it is truly to grasp the inescapable fact the 2015 issues with PHSO are still present at this time.

This data breach was identified by a member of PHSOtheFacts support group. Neither the Patients Association nor the Ombudsman, Mr. Behrens, should be surprised the evidence was submitted directly to PACAC rather than to Mr. Behrens as he personally, as Ombudsman, severed communication with the group. Like the Patients Association, we have tried to be his critical friends. Perhaps there is a lesson here for the next Ombudsman taking over in approximately 20 months time. For the record, I have had no option but to escalate my own issues with PHSO to the Information Commissioner.

“Is the Parliamentary and Health Service Ombudsman currently fit for purpose?”

Your stated in 2015 it was not. It is therefore reasonable to ask the Patients Association to clarify exactly what your recommendation is now. Should patients use them or stay away and perhaps seek the legal route to obtain redress for issues arising from lack of care in health settings?

Predominantly your position statement relies on PHSO’s own measurements against its Service Charter and I take from that the following:

As PHSO measurements identify, there are, as you say, further issues concerning fact sharing, explanation of decisions as well as timeliness of publication. Your rationale goes into great detail regarding PHSO’s own statistics, yet when it comes to the analysis of Trust Pilot and your own data, these are dismissed and discounted for reasons of presentation. Trust Pilot is an avenue for people to share their real life experiences. Your help line should, in theory do the same. In the rationale you state:

“Qualitative information from the help line remains a rich and valuable source of evidence about people’s experiences with PHSO. When people report problems to us, they show much the same characteristics as we noted in our earlier reports”

It is for this reason the Patients Association needs to answer the key question. Your rationale notes reviews posted on Trustpilot report other Ombudsman services receive similar low ratings as PHSO. And you comment:

“There appears to be a wider pattern of Trustpilot attracting negative comment from unhappy users of ombudsman services.”

I draw your attention to a report, complied by Richard Kirkham (University of Sheffield) and Chris Gill (University of Glasgow) which was posted on the website of the UK Administrative Justice Institute (UKAJI) on 29th April this year. This report comes to the conclusion the whole Ombudsman sector is in need of reform.

My final point is to ask why, bearing in mind the torrent of legitimate criticism aimed at PHSO, has the Patients Association not conducted its own in depth review of PHSO as it did in 2014-15? You have, in recent times, commissioned surveys on hospital food, the importance of health and care issues during the 2012 election campaign and patient experiences during Covid 19, so why no survey asking patients for information and their experience about PHSO performance?

I am at a loss to understand why, in the conclusion, you state:

“The performance of PHSO certainly doesn’t seem to have deteriorated, which is arguably quite impressive of itself.”

The reverse implication of this statement is the Patients Association are now impressed that PHSO has yet to improve from its very low base at the time Mr. Behrens took over. It remains the situation that faulty investigations surviving the PHSO complaints screening process lead to a lack of learning by NHS Trusts thus increasing the risk of avoidable deaths.

Perhaps you will kindly respond in the next short period stating:

Finally, I advise you our support group has compiled a book, shortly to be published, documenting individual experiences and pulling together conclusions drawn from them. Della Reynolds, our co-ordinator, has informed me she plans to send a copy to the Patients Association. I like to think you will find the content useful should you deign to make a submission to the next PACAC hearing on behalf of patients/complainants.

A copy of our book ‘ ‘What’s the point of the Ombudsman?’ has been sent to Lucy Watson. In the meantime David received the following brief reply which fails to address any of his questions.

I wonder how the Patients Association will interpret the latest ‘transparency’ move by PHSO regarding their service charter data. Now that the Ombudsman lists satisfaction scores for both complainants and organisations, something of a discrepancy has been revealed with the organisations recording significantly higher satisfaction scores than the complainants. The overall section score for ‘following an open and fair process’ shows a discrepancy of 22% with organisations consistently providing more positive feedback. A discrepancy of this magnitude indicates that in fact the process is not open and fair but biased towards the organisation.  The Patients Association went to great lengths to analyse the service charter data in their blog, yet somehow they totally overlooked this anomaly. 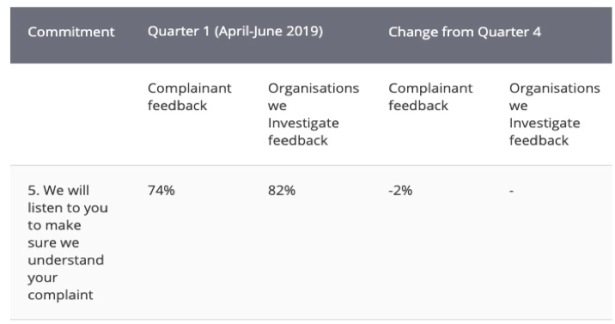 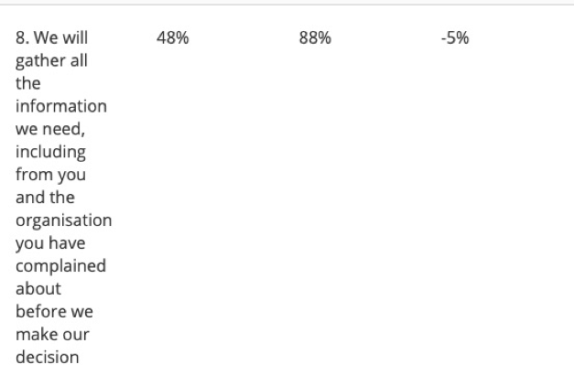 But never mind, Rob Behrens has a solution. Rather than look into the reasons why the organisations are so much more satisfied that the complainants they have decided, much as the Patients Association did, to simply restructure the data. This explanation is from a recent letter written by Rob Behrens to William Wragg, Chair of PACAC

Overall, the research concluded that PHSO should combine the feedback we already receive from complainants and organisations on a number of key Service Charter commitments that directly relate to fairness. This total score will give a well-rounded score on whether PHSO has demonstrated it has acted fairly. We will therefore take the average of the scores on Service Charter commitments 5, 8, 9 and 11 to provide an overall score on whether our users feel we are making fair and impartial decisions. This will be included in our regular quarterly reporting on our Service Charter later in 2020.

When you have two sides in adversarial conflict, taking an average of the scores for both parties will totally obscure any lack of impartiality. I wonder if William Wragg will put a stop to the cunning plan?  Unless they are held to account on this issue, by those with the power to do so, PHSO will get away with fixing their bias problem. No more damning data to explain away.

‘What’s the point of the Ombudsman?’

21 thoughts on “Patients Association concede there has been no improvement at PHSO.”